The interesting thing about time is that it can expand and contract within the same number of counted minutes. How well we enjoy our minutes depends on how well we slow them down. When you are in the early stages of love, six months can seem like a blissful two years and one night can seem like a week’s vacation. Every moment is memorable and rich.

During the early days of my relationship with my wife Zoraida, we were only able to see each other on weekends. I would drive down to her brownstone apartment in Harlem and greet her at the door with a big paper bag overflowing with gourmet groceries. We’d both look at it knowing that we wouldn’t be leaving the house all weekend. We’d smile and laugh excitedly all the way back up the four flights of stairs. We would cook and eat slowly and indulgently, really listen to music, have easy conversation, fall asleep freely, and have plenty of breakfast in bed.

We’d lay there next to each other, feeling no urge to move, and discuss one illusory trip or another: motorcycle adventures through South America, remote beach hideaways in Brazil and private snowed-in cabins in Vermont. We would eventually drag the laptop into bed and start looking up flights and timelines. It became clear that we would need a lifetime to live out all of these dreams and to give the enormity of our love its due course. We decided to get married soon after.

One of our first trips together was a long bucolic drive through the Pyrenees, from Barcelona to Toulouse. The countryside was beautiful but after four hours we were ready to arrive. We pulled into the city that night, looked out at the unspoiled architecture and noticed the way the buildings and plazas are so tight they almost lean in, nudging you to interact with people. We parked the car and made our way down the dimly lit streets with our rolling luggage bouncing imperfectly on the cobblestones. As we entered the Carmes neighborhood and began looking for the house number a man leaned out of his third-floor window, pushing aside the storybook shutters, and cheerfully guided us to where we would find our place.

The “authentic eighteenth-century cocoon”—as it’s dubbed on Airbnb —was in a tall stone house overlooking a quiet neighborhood square. We knocked on its immense door and down came Jean-Marc, our host, who guided us up the stairs and handed us the keys. The ancient feel of the neighborhood was seamless with the feel of the apartment, allowing us to stay tucked away in our encapsulated time and place.  After verifying that the apartment contained no spoilers, we headed out eager to feel the neighborhood. We floated around the maze of narrow streets noticing for the first time that all of the buildings had a subtle pink hue—giving Toulouse the nickname Le Ville Rose as we later found out. As each of these details came to light we would hold each other closer with knowing excitement. Eventually, we came across a tavern that looked enticing so we entered down the steps and were greeted by jovial and curious drunks at the bar in front. A waiter steered us away to the only seat left in the place where we had a generous French country style meal of steak, potatoes, soup, bread, and house wine. After filling our bellies and re-asserting the virtues of life in Europe to each other we headed back to the cocoon. 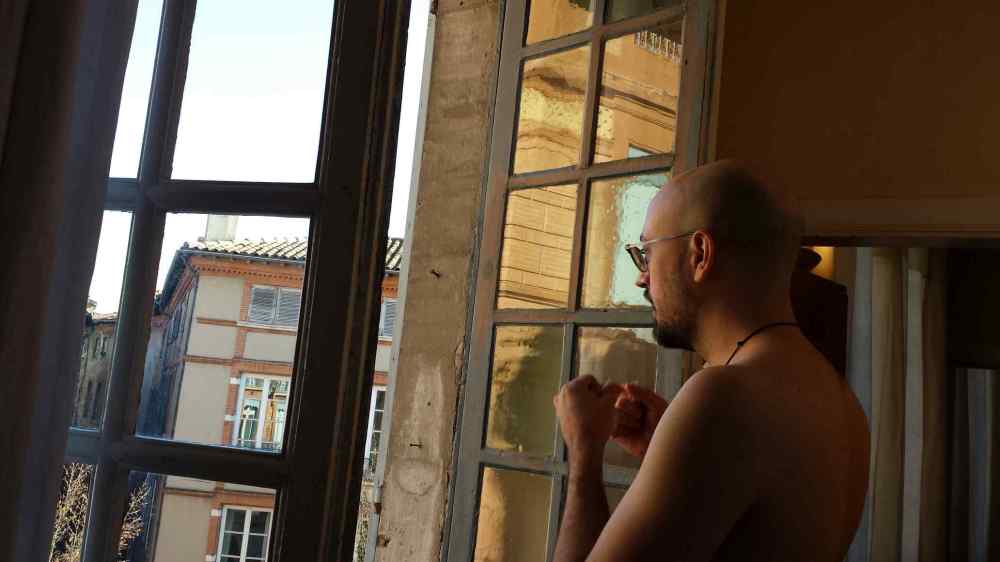 We settled into a routine that week of waking up slowly, buying fresh groceries at the small neighborhood market, and eating a simple breakfast of breads and lavender tea—a Toulouse staple. After breakfast we’d stroll around, stopping only to rest or enjoy a long meal. We spent our days admiring every small detail: the approachable nature of the old man in a tea shop we visited frequently, the girl selling fresh baked cookies from her bicycle cart, or the way the doors in residential neighborhoods had ancient iron knockers in the shape of a knocking fist. At night we’d come back to the cocoon and cook a lavish meal together before each getting dressed in separate rooms and joining in the dining room for a candlelit dinner. The time was moving so slowly just as it had back in Harlem when we first met. Everything we saw was beautiful and everything we ate was delicious. We had all of the space in the world to notice and appreciate each subtle pleasure.

How is it possible that those short weekends in Harlem and that week in Toulouse could carry so much richness and depth in such small amounts of time? Looking back, we actually did very little other than lay around and walk around. That could be the key. The more we try to do, the less space we have to appreciate and enjoy the subtle pleasures around us. If we do less we can enjoy more, forcing time to slow down.

I keep a full plate these days between work, school and a baby, but I try to spend the free time I do have with my wife enjoying simple pleasures. When I come home after work, put on a record and cook with my wife, it fills my cup with satisfaction. I wake up the next day feeling as though I had a nice slow vacation the night before.

This year for Valentines Day, I found the recipe below for Sole au Vin Blanc from Toulouse’s most famous resident Henri Toulouse Lautrec in Saveur Magazine. Toulouse Lautrec would regularly hold exotic gatherings where his guests were encouraged to focus on the now and forget the world around them. One of the tricks he used was to put out pitchers of water with goldfish in them, signifying that there would be no sensible water drinking that night. He wanted his guests to stay put and really enjoy.

Check out the Saveur article for an absinthe cocktail recipe to go with it.

I recommend pairing the Sole au Vin Blanc with Rhye’s Woman. The best songs on this album breathe slowly and melt into the background, allowing your mind the room to focus on the other pleasures around you. My wife first introduced me to Rhye during those early days in Harlem when we would lay in bed listening to music. It still sets the right mood. I don’t think anyone has mastered the slow and sensuous as well since Sade. I discovered when writing this that last Valentine’s Day Rhye had a show at Le Poisson Rouge in NY lit entirely by candles. It sold out for good reason, but perhaps it’s even better listened to in the intimate setting of your home.