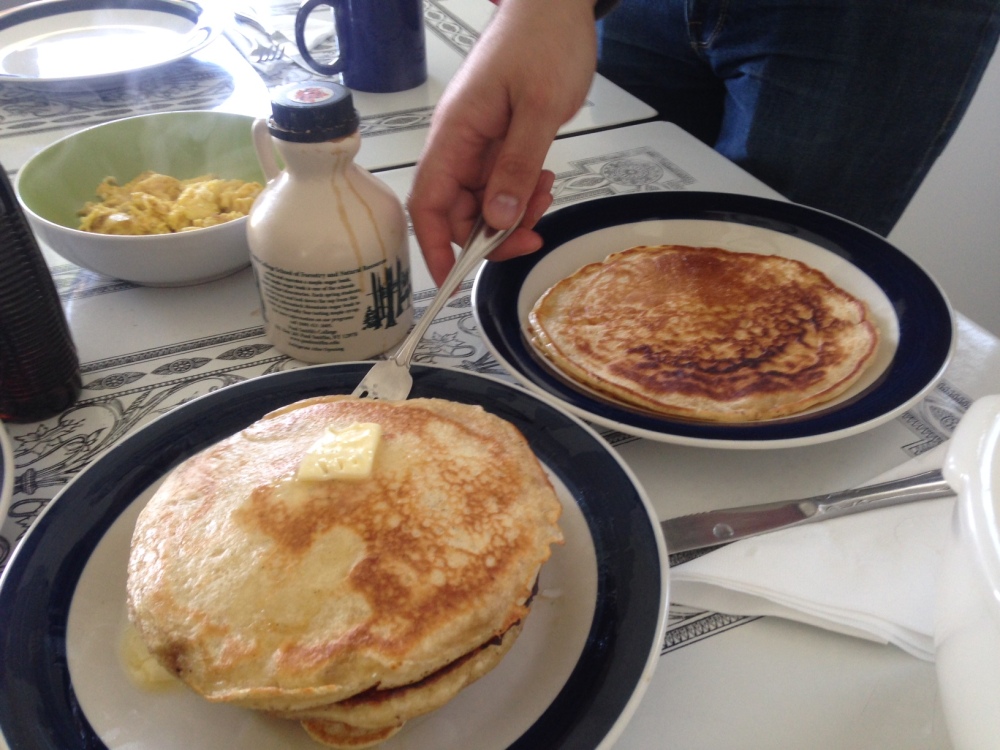 Don Fonda was a king in the realm of pranks and wisecracks.  He would spin yarns to us grandkids about his days working at the telephone company—like the time he switched around the gas gauge and the speedometer in a co-worker’s truck, or the time he drove a fussy trainee deep into the Adirondack Mountains, looking at him suggestively the whole way, and then finally lunging at him,”come ‘ere ya big lug!” He could tell a one-liner that would make you bust a stitch. One of his routines was to point out a buxom woman as we were driving around in his Ford F-250, Big Red, and say in his mock-hillbilly voice, “Mike, look at her; you can tell she’s a girl because of the long hair” and then slap his knee and pant out big a laugh.

He was immaculate in the way he kept everything from his garage to his marriage, and he had mastered methods for life’s maintenance that he generously passed along. He would show you a clever way to wind up an extension cord so that it could hang perfectly from a nail, or model how to use the right amount of humor and humility to keep the tone of a marriage soft.

When I was thirteen my mother and I lived with my grandparents for a while, during which time he shared many of these gems of wisdom.  On weekend mornings he would stand over the stove making steaming batches of pancakes, shoveling them off to the family without sitting to eat until everyone else had gotten theirs. I’d stand in the kitchen watching and I’d hear the same bit of advice each time: to always add buttermilk. Later he’d show me how to tie knots or we’d watch an old movie like Jeremiah Johnson. He’d always turn to me and imitate Robert Redford’s frontiersman mentor in the movie, “you know how to skin grizz’ boy?!”

He was a true classic and the undisputed patriarch of the family. We all look back on him in our own ways but I tend to remember him most when I’m cooking up batches of pancakes for my own little family now on weekend mornings. My wife wonders why I put on Willie Nelson every time I’m cooking pancakes but somehow the combination opens a portal into his spirit for me—although I think he was actually more of a Kenny Rogers fan.

Something about flipping pancakes on a buttery cast-iron pan while listening to Willie Nelson conjures up the type of American experience that my grandfather lived for.  I think his greatest joy besides family was being on the road. In retirement, he convinced my grandmother to sell their house and live in an RV for a year—which he smoothly turned into five. He probably would have fit right in with Willie Nelson’s Highwaymen had he played an instrument!

One cup buttermilk, one cup of flour, one egg and one teaspoon of baking powder.

1.Mix the dry ingredients adding salt and sugar according to preference. I use a tablespoon of sugar and a few pinches of salt.

2. Mix the eggs and buttermilk in another bowl.

3. Mix the wet ingredients into the dry.

4. Get a cast-iron pan nice and hot so it’s almost ready to smoke, melt plenty of butter to cover the surface and ladle in the batter.

5. Once the steam holes have poked through and they have hardened just a bit flip them once. Continue adding butter.

5. As each one finishes add it to a plate, put a pad of butter on top and then cover it with a large bowl. You’ll be amazed how warm they stay while you finish cooking.

6. After you’ve cooked your last pancake mix in a little pancake batter to the egg scramble and pour them into the same piping hot cast iron pan. They shouldn’t stick at all if the pan is hot enough. You should continuously move them for about ten seconds and voila.

As a side note, if the stove top is overly occupied what I like to do is cut the whole pack of bacon in half and add all of the pieces to a baking sheet to cook in the oven. They will come out crispier than you think. Just preheat to 400 degrees and leave them alone for about fifteen minutes.