Good Hammond organ jazz oozes at mid tempo, like mustard out of a bottle. You can hear the instrument’s memory filling the room; the weeds growing through the sidewalk cracks of the industrial wasteland where it was born; the soundtrack it provided for games of kick the can played under a rattling L train; the stolen bases it inspired as it crescendoed in ballparks—where like mustard, it paired so well with hot dogs. Perhaps it’s ability to conjure the spirits of the dead and the dying comes from its ancestral mother, the church.

I first came across this music when I was living on Spring Street in Albany, NY. The street was a ghost, all small converted parking garages, the only one off Lark you passed by without noticing. I lived in a small room in the basement of one of the two row houses left standing. The room was a thin triangle that got narrower as you reached the back, where the kitchen and bathroom door tussled for space. When I wasn’t at work washing dishes and chopping vegetables I was wandered around town to escape it.

Albany has a lot of ancient pockets where the city’s oldest men preside. I’d visit those places alone, as an observer mostly. At the Palais Royale on Jefferson Street, Rocky, the owner, (in his late eighties or early nineties) would play the piano and repeat stories about how his father used to pass hooch through the little side window during prohibition, or about the infamous Albany Irish gangster Legs Diamond—Legs once tipped a young Rocky fifteen cents for shining his shoes, years later he was shot dead right there on Jefferson; at Sam’s Home Cooking I’d order the most utilitarian thing on the menu—two hot dogs with fries—and quietly envy the guys whose order Sam already knew.  Sometimes he would charge these guys sometimes he wouldn’t, directly contradicting the sign behind the register that read, “Helen Waite is Sam’s credit manager; if you want credit, go to Helen Waite!” Like Rocky’s, their stories repeated, usually stuff about the Korean War or local baseball. They were selecting from the same bag, like picking out songs on a long neglected jukebox. Some were retired, some homeless, and they were all more graceful at this leisure business. I liked the way they moved around. 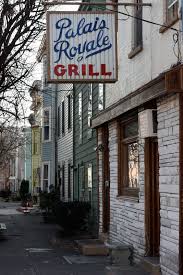 As I said, around that time I came across Hammond organ jazz. It was while I was washing dishes at Ogden’s on the corner of Howard and Lodge. I was in my dingy corner splashing around in the sink when the radio program switched to the music of Jimmy Smith, Oscar Peterson, and Lou Donaldson on the silver boombox I kept overhead. The thick hazy Hammond swing on these joints hovered around me, further encapsulating me in this illusory post war landscape I was secretly living in.

Bored and aimless, I could travel through time with the help of these old men—who were doing a sort of time travel of their own—and this music. I’d travel to a lunch counter in some conflated period between the forties and sixties where I’d enjoy my hot dog with mustard over baseball chatter and then climb back down into my apartment, put on a Bill Doggett record and flop down on the bed by the half-window.

This memorial day we’ll be in smaller groups but we can still have our hot dogs and memorialize the past. The recipe below along with the music will help. Or, we can make something new.

You don’t need a recipe for Albany hot dogs, so since I must give you a recipe it will be for the tastiest ones, Chicago style. Also, Chicago happens to be the capital of this sort of vibe. Chicago style dogs and the Hammond organ were both born there during the depression.

Poppy Seed Hot Dog Roll (if you can find it)-Steamed

Vienna Hot Dogs or Other All Beef Dogs

And the following applied in this order:

*cook the dogs however you prefer but the traditional method is steamed in Chicago.